A system might have two kinds of clocks available to use in the system, a Wall-Clock Timer and a Monotonic Clock. 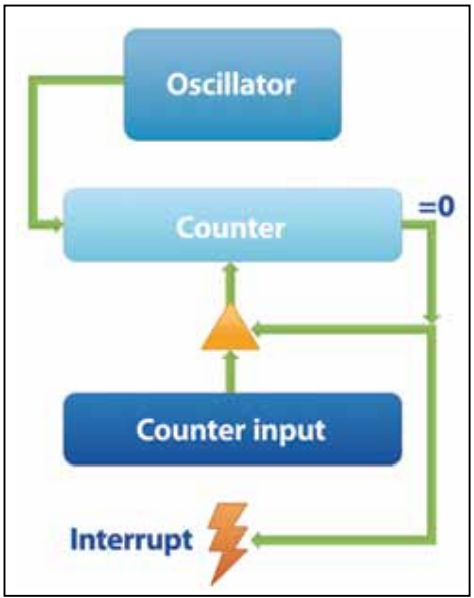 Hardware Clocks at an abstract level comprise of an oscillator set to a frequency which could be fixed or set by the operating system at boot. There are various types of hardware timers available in a system: Programmable Interval Timer (PIT), CMOS RTC, per-processor advance programmable interrupt controller (APIC), Advanced Configuration and Power Interface (ACPI) Timer, Timestamp Counter, High Precision Event Timer (HPET).

Big words, will be discussed in this section.

Initially, the computer reads latest time from the battery-powered CMOS Real Time Clock to initialize other clocks in the system.

Latest linux kernels exposes the clocks described in the above sections via the Clocksource framework to expose different clock sources via a generic API [4]. In a bare-metal Linux system, the clocksources might consist of the TSC, ACPI Power Management timer, the HPET etc.

User-mode time related functions like gettimeofday, clock_gettime are backed by these clock sources. Using the clock_sources system-call, various different types of clocks in the systems can be accessed by a user-mode program.

Available Clock IDs could include:

Run man clock_gettime in your favourite shell to learn more about clock_gettime. The current clocksource is used as the basis for all these timers.

As their name suggests, these different clock implementation has different characteristics. The REALTIME clocks give wall-clock time while the MONOTONIC clocks give apparent time.

For the current time-of-day and date, Windows uses the CMOS RTC at boot to initialize the System Time [10]. This time can be obtained by using the GetSystemTimeAsFileTime function. System Time in windows can be adjusted by the user.

A monotonic clock, Interrupt Time[11] is maintained by windows which is updated at 100ns intervals. This timer cannot be changed by the user and is a tick counter (updated via interrupts). The QueryInterruptTime and QueryInterruptTimePrecise can be used to access the Interrupt Time with a resolution ranging from 0.5ms to 15.625ms.

Older versions of Windows implemented the high-resolution performance counter using either the non-invariant TSC which could cause synchronization problems across cores (in XP and 2000) or the HPET (in Vista). Starting from Windows 7, the performance counter is implemented via the constant rate TSC (using the RDTSC/RDTSCP instruction). Microsoft does not recommend using RDTSC/RDTSCP due to issues surrounding non-invariant TSCs and to leverage the abstraction and consistency provided by QueryPerformanceCounter.

A low-resolution timer Windows Time[12] is also available which counts the number of milliseconds elapsed since boot. It is accessible via the GetTick and GetTick64 function. It is primarily present for backwards compatibility with 16-bit Windows applications.

There are so many timers available in a system! PIT, HPET, RTC, APIC, ACPI, TSC! Wall Clocks, Monotonic Clocks! Let’s take a look at which timer is used by the standard library of various languages.

However, the Golang docs does not specify which APIs does Golang use internally for retrieving wall-clock or monotonic time.

The time modules source code reveals time.Now on two runtime specific functions now for the wall-clock and runtimeNano for the monotonic clock. These functions are individually implemented for each runtime supported by Golang. 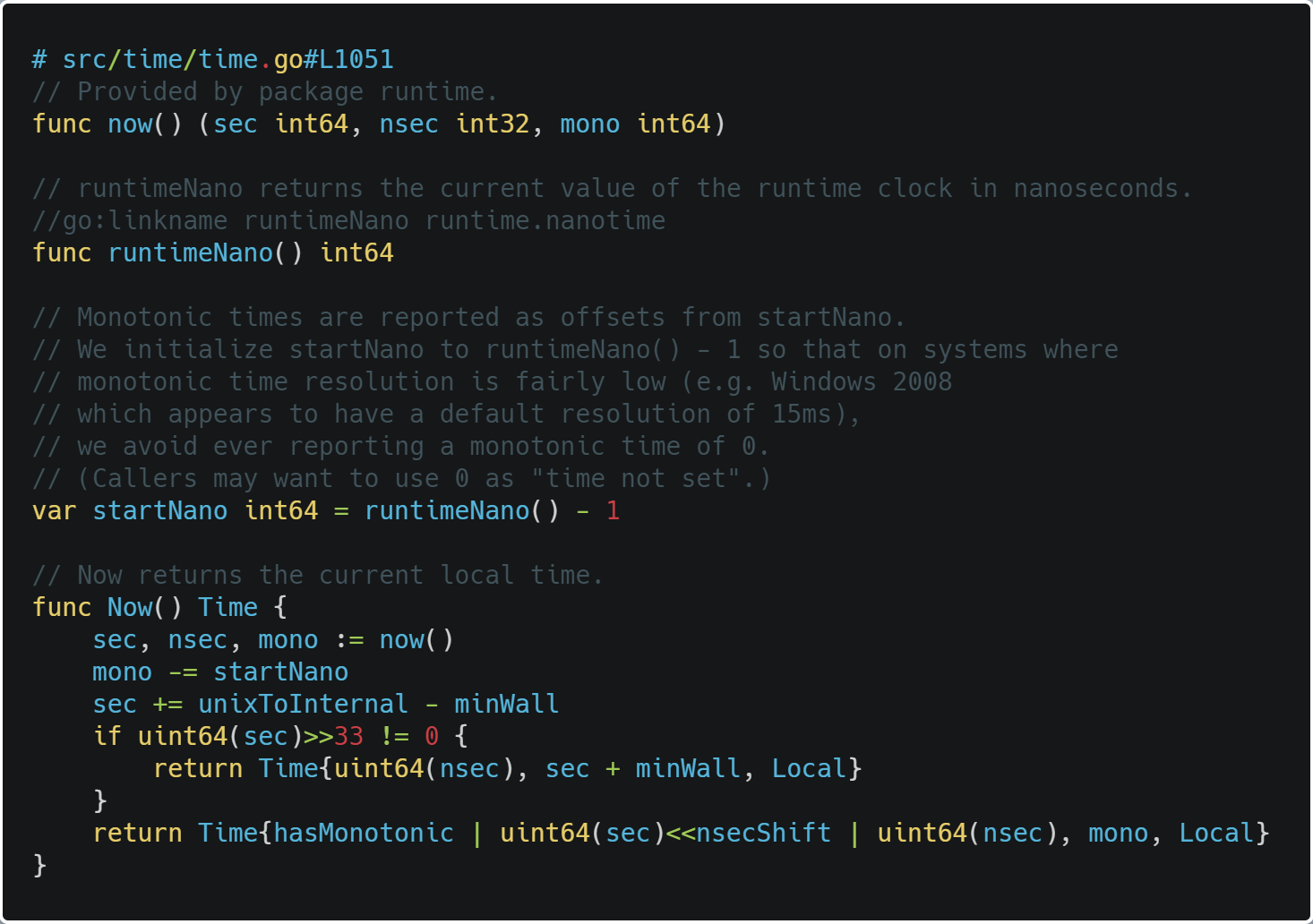 The Windows Golang runtime uses QueryPerformanceCounter API to implement runtimeNano for monotonic clock-reading (which in turn uses the invariant TSC) and the GetSystemTimeAsFileTime API to implement now() for wall-clock time reading. 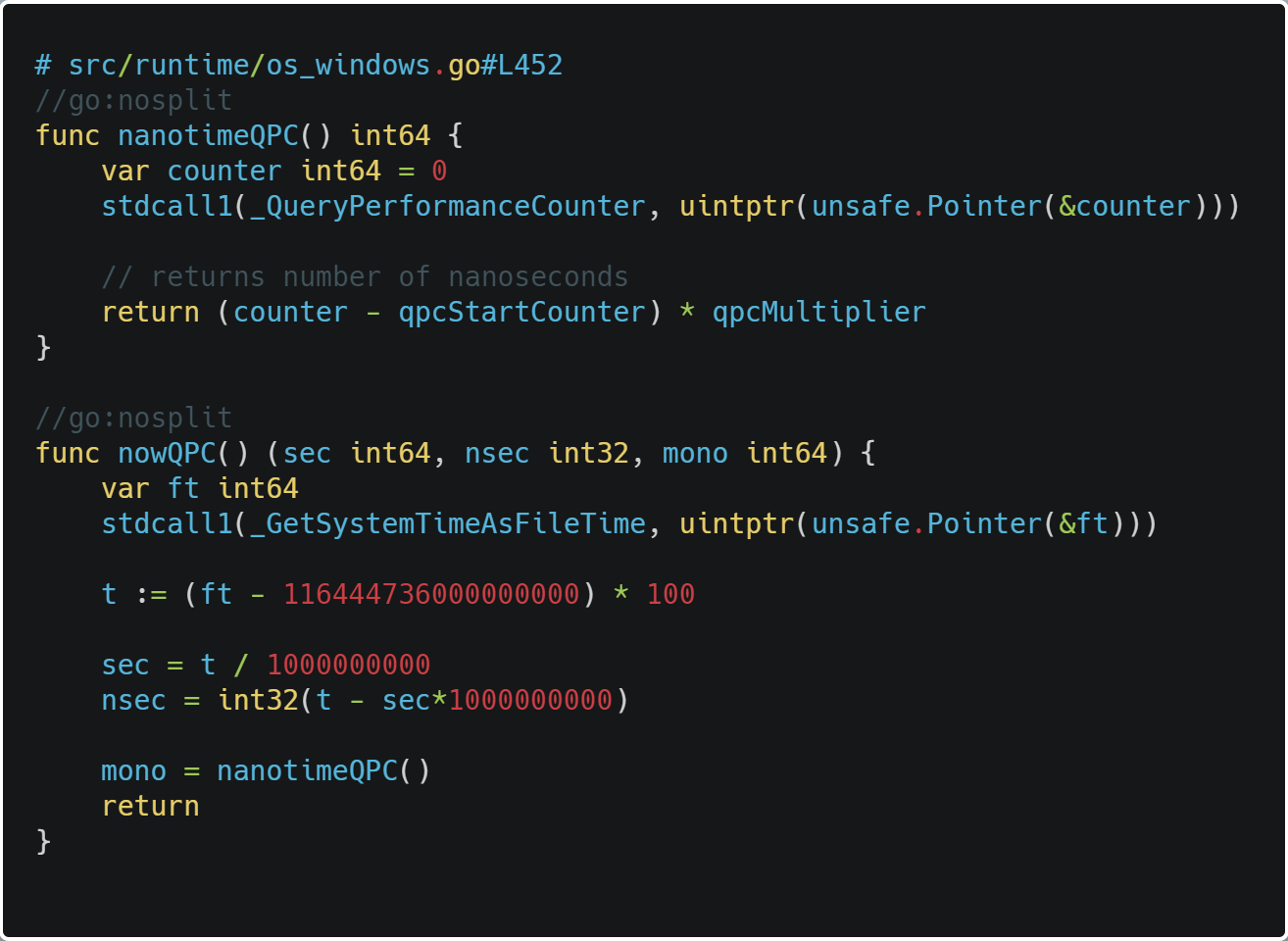 Rust’s documentation conveniently documents the source of time used by the timers present in its standard library.

Wall-clock time is fetched using std::time::SystemTime[15] which uses GetSystemTimeAsFileTime on Windows and CLOCK_REALTIME on Linux.

Python provides time.get_clock_info in its time library to get implementation-specific information of the five clocks exposed by the time library [16]. We focus on three: monotonic, perf_counter and time.

On Windows, this clock is implemented using GetTickCount64 which is a low-resolution monotonic clock (Windows Time as discussed above).

On Linux, this clock is implemented using CLOCK_MONOTONIC .

On Windows, this clock is implemented using QueryPerformanceCounter which in turn uses the invariant TSC internally.

It returns the value of a wall clock as a floating-point number which represents the time since epoch in seconds.

On Windows, this is implemented using GetSystemTimeAsFileTime which is the System Time as discussed in the previous sections.

On Linux, this is implemented using CLOCK_REALTIME .

On Windows, Node.js QueryPerformanceCounter for its monotonic clock with fall-backs to HPET or ACPI PM timer in case an invariant TSC is not present and CLOCK_MONOTONIC on Linux. It uses GetSystemTimeAsFileTime for wall-clock time readings on Windows.

Hypervisors like VMWare ESXi or Workstation virtualize all the above described timers for the virtual machine, though there might be trade-offs involved.

I have not been able to find similar implementation information for KVM or other hypervisors.

In both Intel VT-x and AMD SVM, the TSC can be fully virtualized by trapping the RDTSC, RDMSR, WRMSR and RDTSCP instructions [5]. Also, it is possible to pass through the host TSC to the virtual machine. Both trapping and passthrough are implemented in KVM [5].

Issues surrounding TSC synchronization arise from the fact that the CPUs frequency can be altered by the system for different reasons. This can change the rate of TSC per-processor. The Inter-CPU drift is even further amplified in the case of inter-socket drift in the case of multi-socket systems [7].

Apart from solutions in software, newer x86 CPUs also include an invariant TSC which operates independently of the CPUs current frequency, guaranteeing the rate of the TSC. This can even be used a wall-clock source.

VMWare provides an exactly synchronized view of the TSC to the virtual machine [1], either backed by the physical TSC itself, or an emulated virtual TSC if the physical TSC turns out to be unsynchronized at the trade-off of increasing execution times of the RDTSC instruction.

Hyper-V, similar to VMWare’s products, provides virtualized timer services based on a reference time source in the host. According to the Top-Level Functional Specifications (v6.0b), a per-virtual machine reference counter, four synthetic timers per-vCPU, one virtualized APIC timer per vCPU, two timer assists, and a partition reference time enlightenment based on support for an invariant TSC is available to the guest.

In the WSL2 Kernel, the only available clocksource is based on this partition wide TSC enlightened clocksource.

By default VirtualBox exposes the time sources available to the guest synchronized to the host’s monotonic clock. However, there is also a special configuration available to make the virtual guest TSC reflect the actual time spent by the CPU executing the guest. Depending on the hardware TSC, it might be unreliable to use the TSC for measurements.